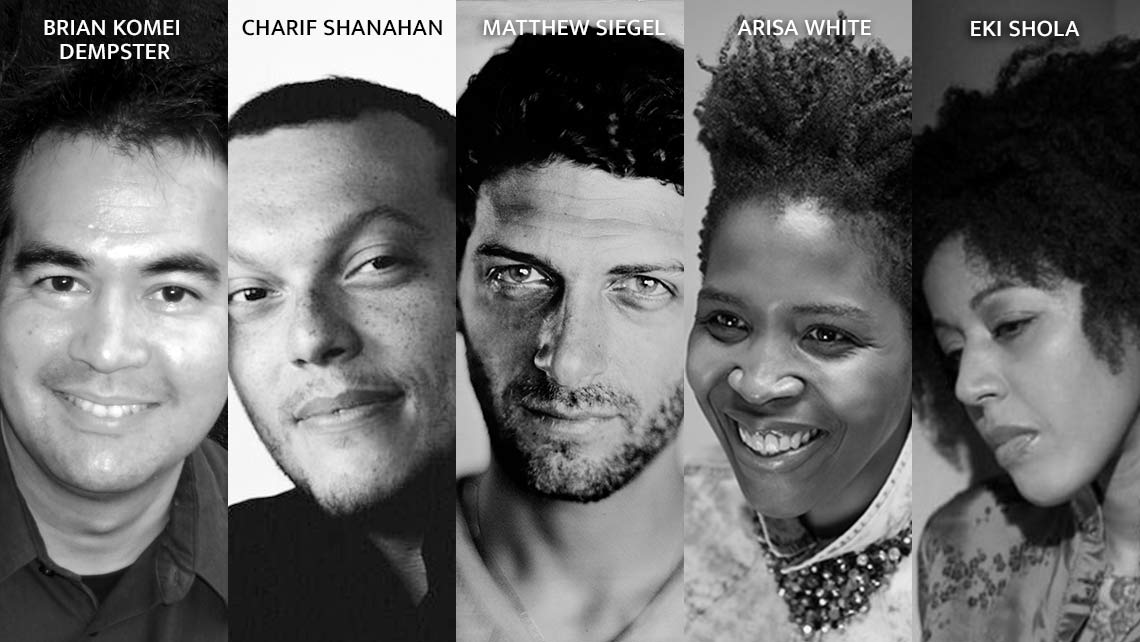 BRIAN KOMEI DEMPSTER’s debut book of poetry, Topaz (Four Way Books, 2013), received the 15 Bytes 2014 Book Award in Poetry. Dempster is editor of From Our Side of the Fence: Growing Up in America’s Concentration Camps (Kearny Street Workshop, 2001), which received a 2007 Nisei Voices Award from the National Japanese American Historical Society, and Making Home from War: Stories of Japanese American Exile and Resettlement (Heyday, 2011). He is a professor of rhetoric and language at the University of San Francisco, where he also serves as Director of Administration for the Master of Arts in Asia Pacific Studies.

CHARIF SHANAHAN is the author of Into Each Room We Enter without Knowing (SIU Press, 2017), winner of the 2015 Crab Orchard Series in Poetry First Book Award. His poems and translations have appeared in numerous publications, including Baffler, Boston Review, Callaloo, Literary Hub, New Republic, Poetry International, Prairie Schooner, and A Public Space. A two-time Pushcart Prize nominee, he is the recipient of awards and fellowships from the Academy of American Poets, the Cave Canem Foundation, the Frost Place, the Fulbright Program/IIE, Millay Colony for the Arts, and Stanford University, where he is a Wallace Stegner Fellow in Poetry.

MATTHEW SIEGEL is the author of Blood Work, winner of the Felix Pollak Prize in Poetry from University of Wisconsin-Madison. Blood Work was also released on CB Editions in the U.K. where it was shortlisted for The Felix Dennis Prize for Best First Collection by the Forward Foundation. Siegel’s writing has appeared or is forthcoming in The Guardian, Indiana Review, The Rumpus, Tin House, and elsewhere. A former Wallace Stegner Fellow at Stanford, Siegel is a currently teaches writing and literature at San Francisco Conservatory of Music.

Cave Canem graduate fellow ARISA WHITE received her MFA from UMass, Amherst, and is the author of Black Pearl, Post Pardon, Hurrah’s Nest, and A Penny Saved. She teaches in the low-residency BFA program at Goddard College and is a member of the board of directors for Nomadic Press. You’re the Most Beautiful Thing that Happened, her recent collection from Augury Books, was nominated for a 29th Lambda Literary Award.

EKI SHOLA is a musician and physician who plays lush chillout with a slice of soulful electro-jazz. Eki writes: “As a physician, I have witnessed how the physical and emotional manifestations of stress, fatigue and spiritual disconnection can adversely impact the ability to live an enriched, purposeful and fulfilled life. As a musician, my hope is to compose music that allows listeners to relax and ease the daily stressors of life. Playing piano since the age of 5, my musical journey transitioned into a zone of healing arising from a place of despair after experiencing the loss of my mother in 2012. An artistic musical sound exploration that combines electronica, jazz, classical and soul resulted in the composition of an album, Final Beginning, that evokes a range of emotions. Final Beginning is a story about life after death and concludes with the audible realization that life is about inner reflections and improvisational healing.”