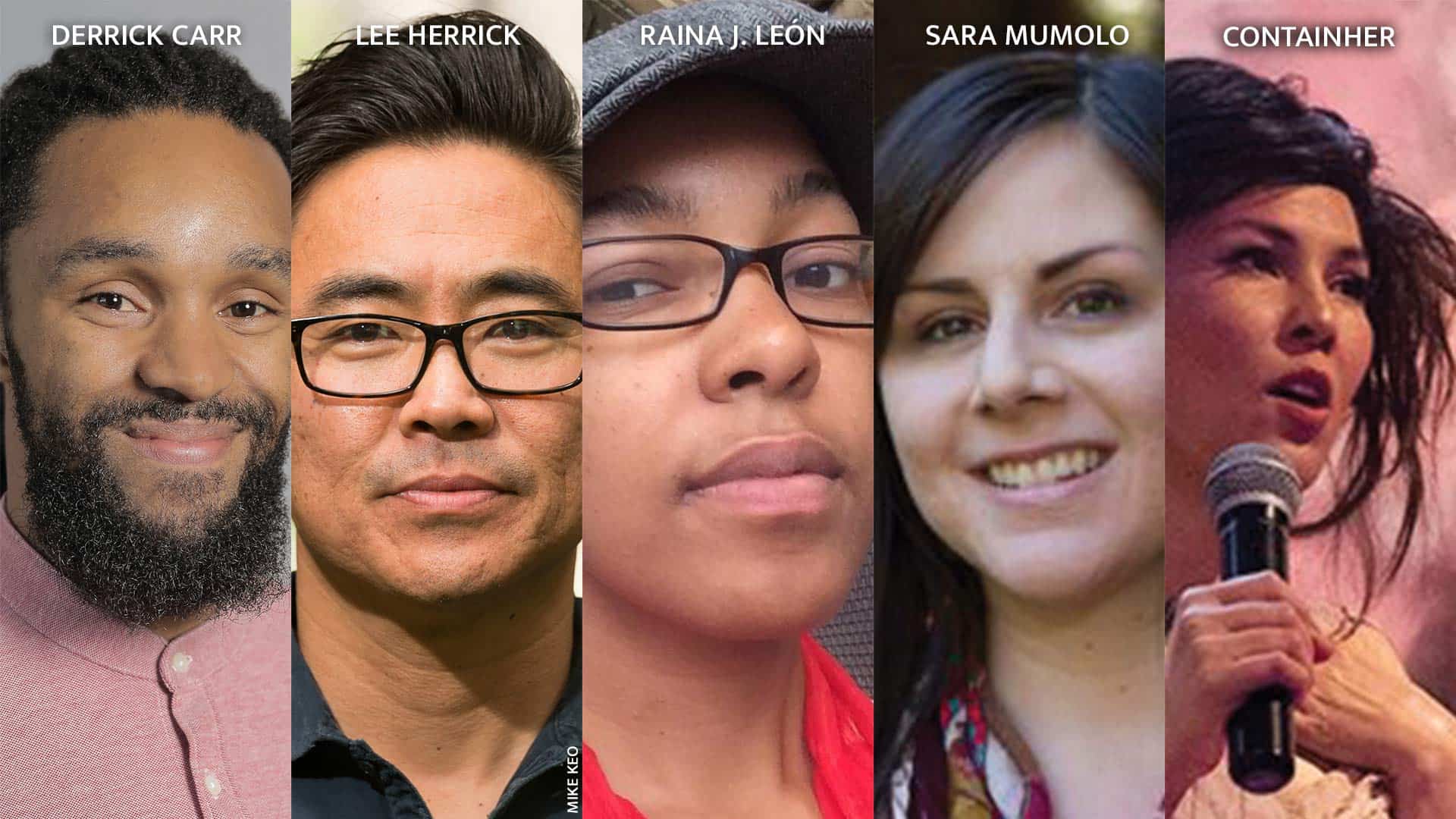 Derrick Carr has lived in the San Francisco Bay Area since he was old enough to read. He graduated from Yale in 2011 with a degree in Black people. His work has been published or is forthcoming in Muzzle Magazine, Adroit, and Oakland Review. He’s co-edited Tandem, an annual anthology published through The Lit Slam, a nonprofit working to broaden the conversation around literature. He’s participated in KSW/CIIS’s Interdisciplinary Writer’s Lab and is a founding fellow in OCTO, an interdisciplinary collective of black artists in the Bay Area. Like his mother and grandmothers, all he knows is survival. You can keep up with him at tinyletter.com/whyderrick

Lee Herrick is the author of two books, Gardening Secrets of the Dead and This Many Miles from Desire. He recently completed a two-year term as Fresno Poet Laureate and serves on the advisory board of The Adoption Museum Project. His poems have appeared in many literary magazines, anthologies, and college textbooks, including The Bloomsbury Review, ZYZZYVA, Columbia Poetry Review, Highway 99: A Literary Journey Through California’s Great Central Valley, 2nd edition, Indivisible: Poems of Social Justice, and Visions Across the Americas, 8th edition, among others. Born in Daejeon, South Korea and adopted at ten months, he lives in Fresno, California and teaches at Fresno City College and in the MFA Program at Sierra Nevada College.

Raina J. León is Co-Founder and Editor-in-Chief of The Acentos Review, and the author of three poetry books: Canticle of Idols, Boogeyman Dawn, and sombra: (dis)locate, and the chapbook, profeta without refuge. She is a member of the Cave Canem, CantoMundo, Macondo, and Carolina African American Writers Collective communities. She is an associate professor of education at Saint Mary’s College of California.

Sara Mumolo is the author of the poetry collection Mortar and the Associate Director for the MFA in Creative Writing at Saint Mary’s College of CA. She has received residencies to Vermont Studio Center, Caldera Center for the Arts, and Pro Arts Gallery. Some of her poems have appeared in PEN Poetry Series, Lana Turner, and 1913: a journal of forms. Her next book Day Counter is forthcoming in 2019 from Omnidawn. She lives in Oakland, CA.

Musical guest ContainHer is April Natalie Gee, a female artist, vocalist and electronic music producer who weaves transcendental sci-fi dreams into indy electro-pop that scintillates with warmth and emotion. Containher can be likened to Depeche Mode being serenaded by Sade under an Abba sun. April has composed a number of video game soundtracks and also released a soundtrack associated with an Image Comic book called Carbon Grey. She will be producing a score for the upcoming live action film based on Carbon Grey, which will begin filming in 2018.