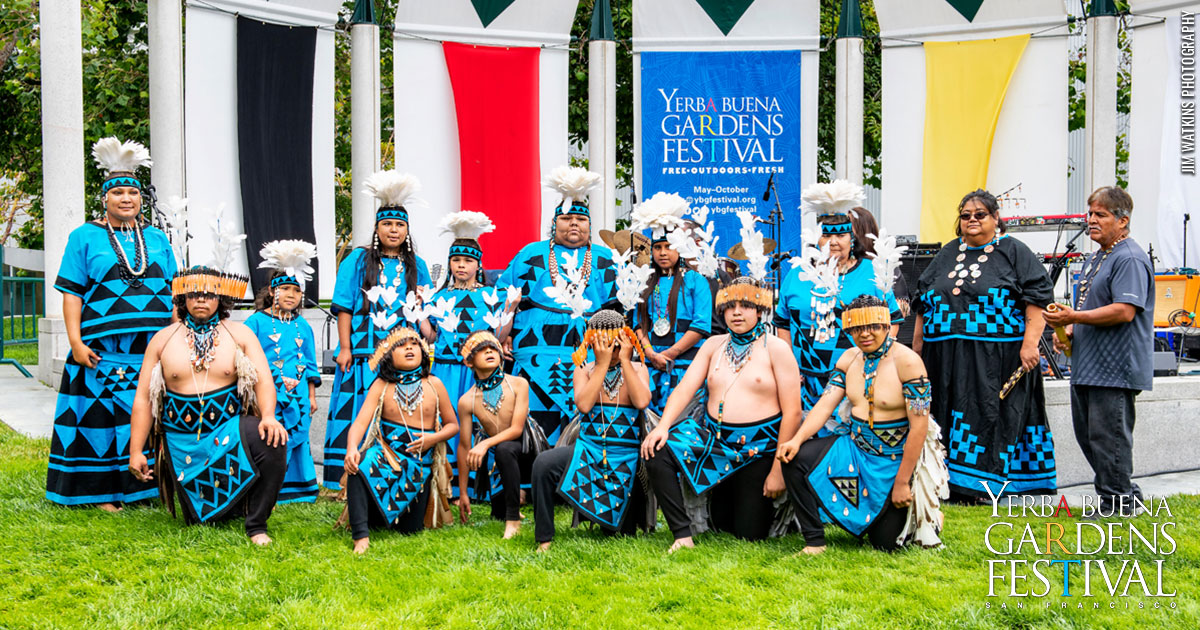 Winnama-Bakay-Yachma Pomo Dancers
The Winnama-Bakay-Yachma Pomo Dancers join us today, having come from their traditional homelands at Stewarts Point, 110 miles north of San Francisco along the California Coast.  “The People from the Top of Land,” also known as Kashaya, have lived in this coastal area for thousands of years and continue to live here even after colonization first by the Russians, then the Spanish and the U.S. Through the vision of Coleen McCloud and her cousin Alwood Smith, the dance group bearing their tribal name was formed around 2006. Husband Chester McCloud and Alwood Smith are the “rock” singers who keep the beat and wife Coleen is the lead singer who shares the words. The group is comprised of various Kashaya blood relatives, primarily adult children and grandchildren who have all grown up in the roundhouses of Lake County, Point Arena and Sonoma County Kashia, dancing in ceremony and learning their culture and protocols since their earliest years. The public dancing is all “feather dancing,” a form of dance based on the men’s regalia. It is different from the ceremonial roundhouse dancing. There are some feather or toto dances done in the roundhouse but different dances have different functions and the ceremonial dances are never done outside the roundhouse. The express purpose of public dancing is to share aspects of Pomo culture and educate the public about the living traditional practices and dances of Pomo people today. The men’s regalia are made by Alwood and the women’s regalia are made by Coleen. The group notes that all songs, public or ceremonial, are prayers for the health and wellness of all people and that they are pleased to share these dances and songs with us all.