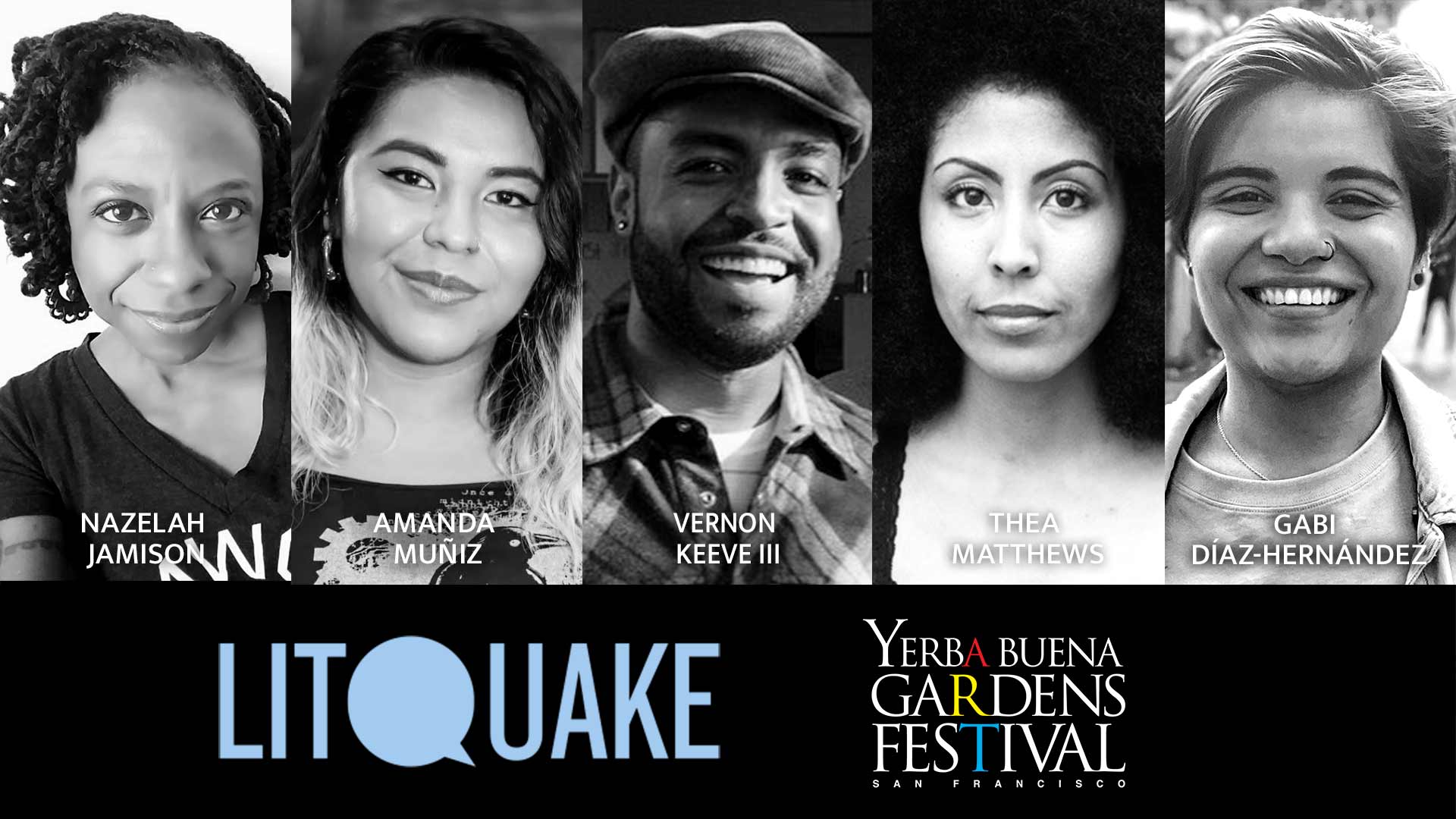 Lines and lyrics from Litquake Nation! Enjoy line breaks during your lunch break, as some of the Bay Area’s best poets and musicians share their work in the great outdoors. Curated by Baruch Porras-Hernandez.

Nazelah Jamison is a performance poet, actor, vocalist, and emcee. She is an East Coast transplant, former organizer of the Oakland Poetry Slam and sometimes reluctant superhero. Her first book of poetry, Evolutionary Heart, was released in Fall of 2016 on Nomadic Press. Nazelah gives the best hugs in the Bay Area.

Amanda Muñiz is a Mexican writer born in Puebla and raised in Oakland, California. She majored in English Literature from San Francisco State. Her work has been published by Pochino press, and she has been a featured reader in various shows in the Bay Area including the electrifying ¿Donde Esta Mi Gente? the hilarious ¿Donde Esta mi Comedy?, BEASTCrawl, Literary Speakeasy, and Litquake’s legendary Lit Crawl. The immigrant experience has inspired most of her writing, which she considers a reflection and a testament of her family’s resilience as well as a never-ending letter of love and gratitude to her parents.

Vernon Keeve III is a Virginia born writer. He currently lives and teaches in Oakland. His purpose is to teach the next generation the importance of relaying their personal narratives, sharing their experiences, and taking control of their destinies. He holds a MFA from CCA, and a MA in Teaching Literature from Bard College. His full-length collection of poetry, Southern Migrant Mixtape, was published by Nomadic Press last year–it was nominated for the California Book Award, the Pushcart Awards, and the Lambda Literary Award.

Born and raised in San Francisco, CA, Thea Matthews earned her BA in Sociology from UC Berkeley, where she studied and taught June Jordan’s Poetry for the People. She is a published poet / scholar / activist who writes on the complexities of humanity, grief, and resiliency.

Musical guest Gabi Díaz-Hernández is a Mexican-American musician and general lover of arts raised in south Georgia who has lived in The Bay Area for the past four years. She uses music to process her immigrant disorientation, melancholy, and bittersweet beauty of not being “ni de aquí, ni de allá” and is constantly finding home and joy in different lyrics, beats, melodies, and musical communities in The Bay or wherever else her feet are.