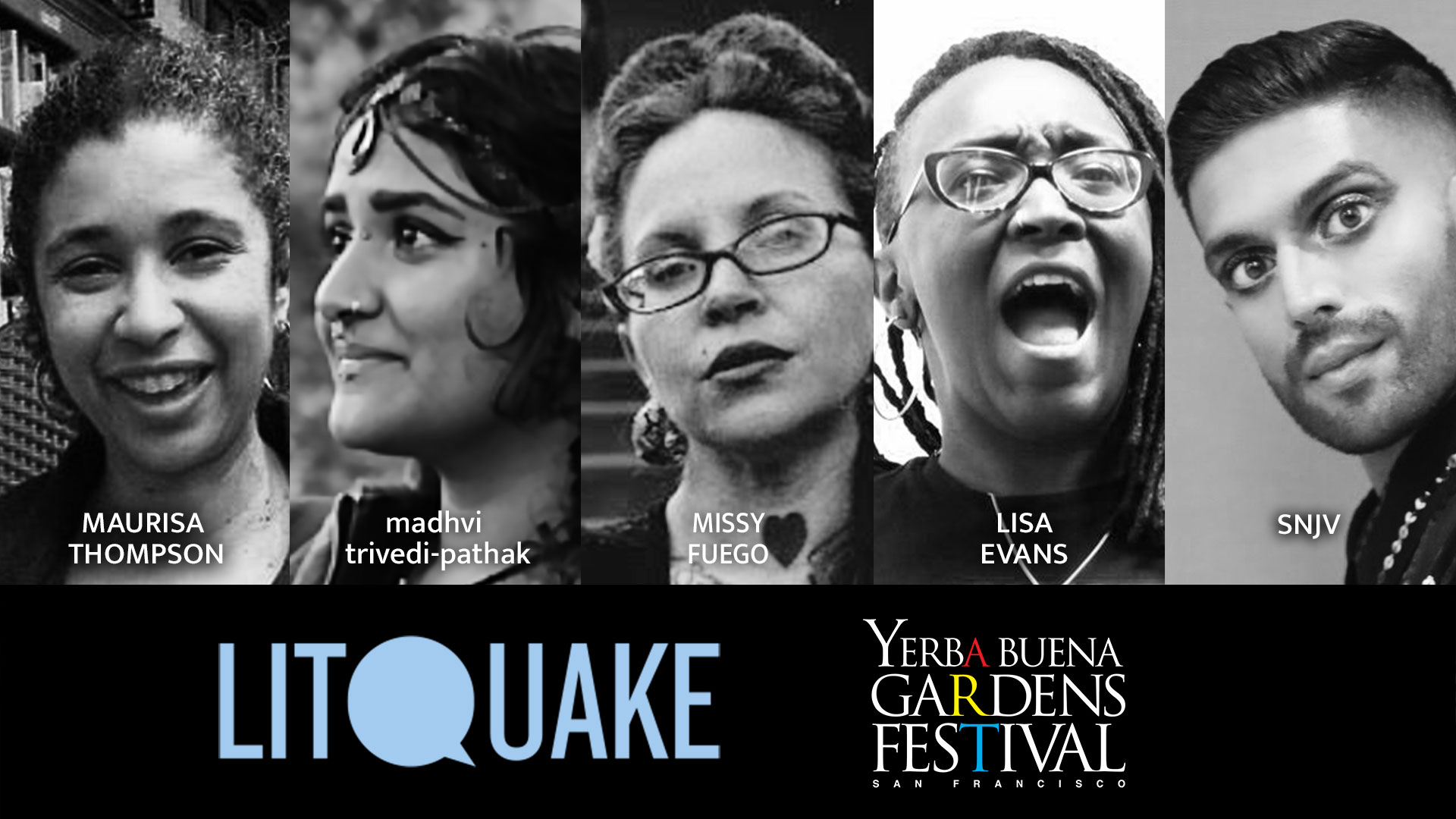 Lines and lyrics from Litquake Nation! Enjoy line breaks during your lunch break, as some of the Bay Area’s best poets and musicians share their work in the great outdoors. Curated by Baruch Porras-Hernandez.

Maurisa Thompson was born and raised in San Francisco, and is a proud alum of June Jordan’s Poetry for the People. A poet and educator, she is a graduate of UC Riverside’s MFA program and is currently teaching English at John O’Connell High School in San Francisco. Her poetry has appeared or is forthcoming in The Pedestal Magazine, The Black Scholar, La Bloga, Cosmonauts Avenue, the anthologies A Feather Floating on the Water: Poems for Our Children and En Vuelo: In Celebration of el Tecolote, and The Haight-Ashbury Journal, which nominated her for a Pushcart Prize. She has worked with arts organizations including Richmond’s RAW Talent and the Gluck Fellowship program at UC Riverside. She is currently working on her first poetry manuscript that combines history and folklore with her grandparents’ stories from Louisiana and San Francisco, and a middle-grade novel exploring police brutality, which won the support of a Walter Grant from We Need Diverse Books.

madhvi trivedi-pathak (they/them)
Community organizer and educator, madhvi trivedi-pathak’s poetry wards off the evil-eye of state-sanctioned-cis-straight-assimilation and honors the decolonial tongue. They are a queer, non-binary South Asian artist whose work reveals a portal to the poetic praxis of disability justice, azaadi (liberation) and the intergenerational tremors of trauma yet to be resolved.

Meliza Bañales aka Missy Fuego is the author of three books, most notably her novel Life Is Wonderful, People Are Terrific which was a 2016 Lambda Literary Finalist for Best Debut LGBT Fiction. She is at work on a fourth book, a manifesto entitled Adventure Awaits You In Hell and has served as a professor in the Creative Writing department at the University of California, San Diego since 2015. She lives in Los Angeles.

Lisa Evans (they/them) is a black non-binary performance artist, producer and cultural worker based out of Oakland, CA. They have worked with several different Bay Area youth development and arts organizations including Youth Uprising, Destiny Arts Center, The California Shakespeare Theater, The Rose Center and more. Lisa directed the premiere production of “Waafrika123” at TheatreFirst and premiered their solo show “You Really Should Sit Like A Lady (or how I got to Femme)” as a part of the Hope Mohr Dance Project’s 2017 Bridge Project at CounterPulse and completed a second run as a part of Playground’s 2018 Solofest. Lisa is the co-founder of the #BreakingtheBinary Project, an initiative that supported theater arts organizations across the United States in creating sustainable practices for TGNCNB2-S (trans, gender non-conforming, non-binary, Two Spirit) inclusion. Their most recent project, created in collaboration with Sabaa Zareena, “Blessed Be the Black and Crazy” was exhibited as a part of the 2018 The Black Woman Is God exhibit at Somarts and “Communion” an exhibit curated by The Church of Black Feminist Thought at the Ashara Ekundayo Gallery. Their newest project “Confronting The Ghost of Willie Lynch: An Exorcism in Six Parts” a site-specific haunted house-inspired theatre piece was presented as a part of the 2019 National Queer Arts Festival.

SNJV is a drag artist who infuses culture into movement and fashion to create a story inclusive to all. He proudly holds the title as Mister GAPA (Gay Asian Pacific Alliance) 2019 and is the first South-Asian title holder in its history. He is co-founder of Parivar (means family in Hindi)-an organization to support and celebrate queer, trans, gender non-conforming folks connected to the South Asian diaspora. They hold events and spaces to affirm each other.