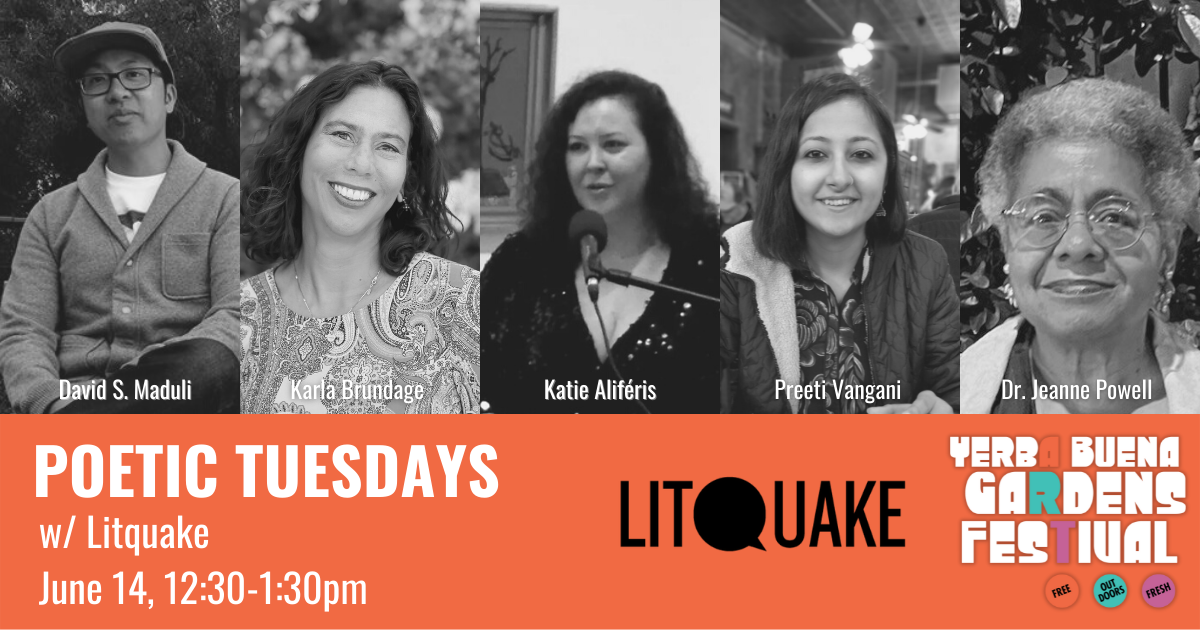 David S. Maduli is a father of two, veteran public school teacher, deejay and author of the chapbook 00:33:33 (thirty-three and a third) (Zoetic Press, 2018). He is an alumnus of the VONA, Las Dos Brujas and Napa Valley Writers’ workshops and he was the 2011 recipient of the Joy Harjo Poetry Prize. A descendant of Filipino immigrants born in San Francisco and raised all over, he is a longtime resident of Oakland, CA. He completed his MFA in Creative Writing at Mills College with a fellowship in Community Poetics.

Karla Brundage is a Bay Area based poet, activist and educator with a passion for social justice. Born in Berkeley, California, Karla spent most of her childhood in Hawaii where she developed a deep love of nature. She is the founder of West Oakland to West Africa Poetry Exchange (WO2WA), which has facilitated cross-cultural exchange between Oakland and West African poets. Her editorial experience includes a pan-Africanist poetry collection, Our Spirits Carry Our Voices, published by Pacific Raven Press in 2020; Oakland Out Loud (2007); and Words Upon the Waters (2006) both by Jukebox Press. Her poetry book, Swallowing Watermelons, was published by Ishmael Reed Publishing Company in 2006. Her poetry, short stories and essays have been widely anthologized and can be found in Hip Mama, Literary Kitchen, Lotus Press, Bamboo Ridge Press, Vibe and Konch Literary Magazine. She holds an MA in Education from San Francisco State University and an MFA from Mills College.

Katie Aliféris is a poet from San Francisco. She has been a featured performer at local and international literary series and events, including The Melbourne Fringe Festival, North Beach First Fridays at City Lights Books, and the SFSU Center for Modern Greek Studies. Her work has been published in various anthologies, journals, and websites, including the San Francisco Public Library’s Poem of the Day. Katie is the author of fool[ishly optimistic] published by Nomadic Press.

Preeti Vangani is a poet and writer from Mumbai, writing and teaching in the Bay Area. She is the author of Mother Tongue Apologize (2019), winner of the RL India Poetry Prize. Her work has been published in The Threepenny Review, Gulf Coast, Cortland Review among other places. A graduate of University of San Francisco’s MFA Program, Preeti has received fellowships and support from UCross, Tin House, Napa Valley Writers’ Conference and the California Center for Cultural Innovation. She has taught with Youth Speaks and at the MFA (Writing) program at University of San Francisco.

Dr. Jeanne Powell holds degrees from Wayne State University and University of San Francisco. She is a published poet and essayist, with four books in print from Taurean Horn Press: My Own Silence, Two Seasons, Word Dancing and Deeply Notched Leaves. Additionally, she has published a collection of essays titled “Carousel” with Regent Press. Jeanne founded Meridien PressWorks which published 20 writers in 20 years. For a decade she hosted “Celebration of the Word,” a weekly open mic, and for seven years Jeanne has been the lead facilitator for “Write if You Dare”, at the Mechanics Institute Library in San Francisco. Jeanne’s film and cultural reviews appear online at starkinsider.com.

Kevin Dublin is a writer of poetry, prose, scripts and code. Currently Director of Litquake’s Elder Writing Project, he’s committed to helping nurture emerging writers of all ages, serving on the board of Bay Area reading series Quiet Lightning and mentoring Black students writers through 826 Valencia. Kevin curates The Living Room Reading Series & Salon and has received fellowships, grants, and awards from the San Francisco Arts Commission, Martha’s Vineyard Institute of Creative Writing, and the Writers Studio. He is author of the chapbook How to Fall in Love in San Diego (Finishing Line Press, 2017) and holds an MFA from San Diego State. His recent work has been featured in The San Franciscan, Cincinnati Review and the North Carolina Literary Review.