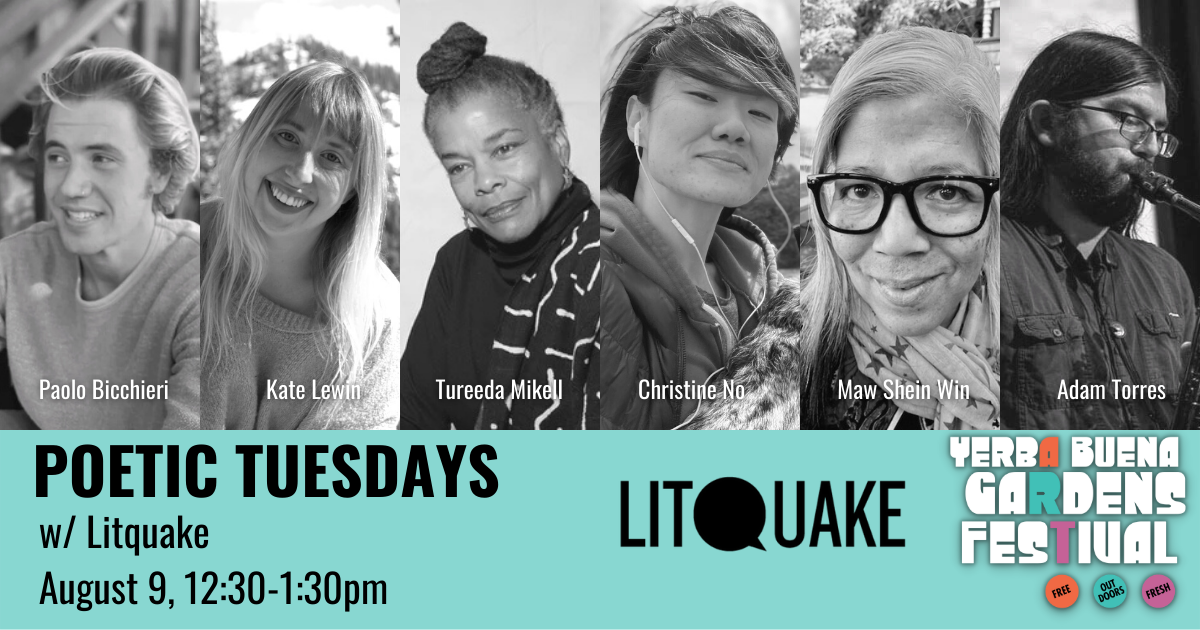 Update (8/8/22): Tony Aldarondo as been added to this program’s lineup.

Tony Aldarondo has performed music and poetry in venues throughout the San Francisco Bay Area, overseas and once while standing up on a JetBlue airplane. He is also a theatre and film actor and a voiceover artist. Tony has just released his first full-length poetry book titled Big Heart Poet. But most of all, he wants to be known as a great Dad.

Paolo Bicchieri is a writer living on the coast. His fourth book and first book of poetry, Familial Animals, was released by Animal Heart Press in the fall of 2021. His poems have appeared in Bay Area Generations, Quiet Lightning, Nomadic Press, Ghost City Press and more. He is a reporter for Eater SF and has recently completed a graduate degree focused on culture, power and social movements for coffee workers in the Chiapas state of Mexico. He thinks teachers deserve the money that cops do not.

Kate Lewin is a Bay Area born educator, stepmom and sometimes poet. Manic depressive pixie dream girl and lover of true crime and most things pink. You can find her words in Syzygy Magazine, at Lady Clever, Guff, Bold Italic and others. If you look deep enough into her eyes, you can see how the universe began—not with a bang, but a “let there be light.”

Tureeda Mikell, Story Medicine Woman, is a Bay Area based poet, educator, elocutionist, activist for holism, called ‘word magician and a U. C. Berkeley Bay Area Writing Project Fellow recently named a MoAD 2022 Poet in Residence. Her work has traveled or Zoomed across several continents and she has published over seventy at-risk student anthologies in five Bay Area School Districts via CA Poets in the Schools since 1989. Synchronicity, The Oracle of Sun Medicine, released in Feb/2020, was nominated for the California Book Award and reviewed in Ishmael Reed’s, Konch Zine, Jan/2022 by Chris Stroffolino.  She is co-author and curator of EastSide Arts Alliance’s Patrice Lumumba Anthology, released Jan/2021, both by Nomadic Press. She was published in Jack Hirschman’s last anthology, Building Socialism II, in March 2021 and was aired on KALW, Bay Poet’s Black History Month in February of 2022.

Christine No is a Korean American poet, filmmaker and daughter of immigrants. She is a Sundance Alum, VONA Fellow, Pushcart Prize and Best of the Net Nominee. She has served as Assistant Features Editor for The Rumpus, a Program Coordinator for VONA; and currently serves on the board of Quiet Lightning, a literary nonprofit in the Bay Area. Christine is interested in the power of storytelling at the intersection of healing and social justice. You can find her work online and in print; and her first full length poetry collection Whatever Love Means is available via Barrelhouse Books. She lives in Oakland with her dog Ruthie Wagmore.

Maw Shein Win‘s recent poetry book is Storage Unit for the Spirit House (Omnidawn) nominated for the Northern California Book Award in Poetry, longlisted for the PEN America Open Book Award and shortlisted for the California Independent Booksellers Alliance’s Golden Poppy Award for Poetry. D.A. Powell wrote of it, “Poetry has long been a vessel, a container of history, emotion, perceptions, keepsakes. This piercing, gorgeous collection stands both inside and outside of containment: the porcelain vase of stargazer lilies is considered alongside the galley convicts, the children sleeping on the cement floors of detention cells, the nats inside their spirit houses; the spirit houses inside their storage units.…These poems are portals to other worlds and to our own, a space in which one sees and one is seen. A marvelous, timely, and resilient book.” Win’s previous collections include Invisible Gifts (Manic D Press); her chapbooks include Ruins of a glittering palace (SPA) and Score and Bone (Nomadic Press). She is the inaugural poet laureate of El Cerrito (2016-2018). She often collaborates with visual artists, musicians and other writers.

Adam Torres is a professional saxophonist and private woodwind instructor based in the Bay Area. He’s played in many ensembles from big bands to small groups and currently attends Berkeley’s California Jazz Conservatory as he finishes his BM in Jazz Studies. He has certificates in Music and Recording Arts from Cuesta College, San Luis Obispo.

Kevin Dublin is a writer of poetry, prose, scripts and code. Currently Director of Litquake’s Elder Writing Project, he’s committed to helping nurture emerging writers of all ages, serving on the board of Bay Area reading series Quiet Lightning and mentoring Black students writers through 826 Valencia. Kevin curates The Living Room Reading Series & Salon and has received fellowships, grants, and awards from the San Francisco Arts Commission, Martha’s Vineyard Institute of Creative Writing, and the Writers Studio. He is author of the chapbook How to Fall in Love in San Diego (Finishing Line Press, 2017) and holds an MFA from San Diego State. His recent work has been featured in The San Franciscan, Cincinnati Review and the North Carolina Literary Review.